Janet Skinner’s life changed one day in 1992 when she arrived at Geebung station to catch a train into Brisbane city.

A sign warned of upcoming disruption as the old station building was to be removed and replaced.

Janet looked at the cream weatherboard building, built in 1886, and decided to paint the station before it was gone forever.

Queensland Rail not only granted her permission to paint Geebung station but gave her a list of others due to be demolished that she might like to paint too.

The Geebung station painting became the first of 107 paintings and sketches of Queensland and New South Wales railway stations, sidings, workshops and locomotives that Janet completed over the next eight years.

Most of the paintings were painted from life (in situ). Janet would take her two young children to school then haul herself, paints, water, brushes, paper, easel and table on to a train to her destination station, paint, then pack up and train it home to collect the children from school.

School holidays enabled her to travel further and she painted stations as far north as Rockhampton, west to Mitchell, and south to the Blue Mountains of NSW.

An extremely successful second exhibition of the railway paintings was held in 2001 after which many people made a return visit to spend more time viewing the paintings.

Janet has spoken to the Australian Railway Historical Society’s Queensland Division about her quest to document our railway’s disappearing heritage. She has also been invited to speak to Rotary members and libraries.

When Janet painted her first station, she was approached by curious commuters, many of whom had tales to tell about it. Eventually, she interviewed 45 of the people she had met during her rail work.

Through one of her speaking engagements, Janet met an historian, John Kerr, who had published a number of books. Through the Pine Rivers Shire arts committee, Janet met a writer, Pauline Recketin.

Janet’s interviews and research became the basis of a book, Romance of the Rail, which Pauline wrote and John helped publish. The book, illustrated with 68 of Janet’s paintings and sketches, has since become a collector’s item.

Janet had lost her voice (6 years) when she began the railway paintings project. The communication difficulties she experienced compounded the isolation she felt, having sold her business and moved from England to Australia with her two young children. The railway paintings connected her to the world when she felt disconnected and were life-changing for her.

Although some buyers have been lucky enough to secure their favourite railway station paintings, Janet has retained 75 of the 107 works. Most of the collection will be on display at any one time at the Railway Gallery on Greenhills Drive, Blackbutt, from early 2023.

Janet continues her railway project and is currently painting a series featuring the Brisbane Valley Rail Trail (BVRT), available as cards and prints.

Romance of the Rail 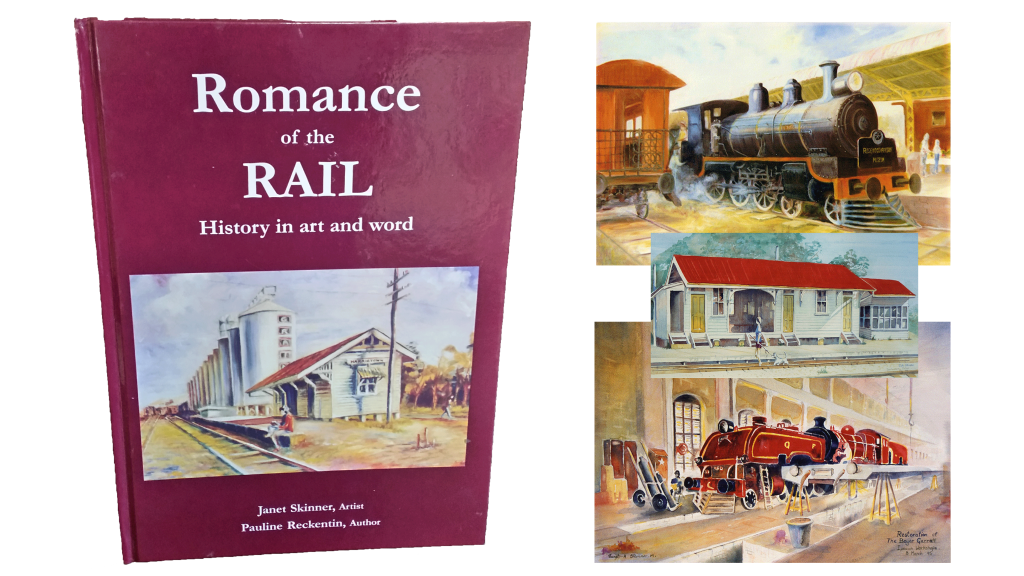 Romance of the Rail is living history, people telling their own stories, inspired and illustrated by the art of Janet Skinner. Rather than simply mourn the loss of familiar railway stations, Janet has turned her artistic skills to preserving their memories.

Granted permission by Queensland Rail, she went from station to station, capturing the essence in her paintings and attracting those who spent their lives in and around those stations.

They told her their stories. Patiently Pauline Reckentin listen to the tapes and turned their words into a book that shares with the reader, memories of life on the railway.

Janet extended her work from Queensland to New South Wales, and captured the spirit of preservation and restoration of railways and locomotives in both states. Well-known rail historian (late) John Kerr has edited the text into a rare combination of art and anecdote.